I have never had a huge group of friends.  I have many good friends.  Cherished friends. But generally, even as a little girl, my friends were not all friends with each other.  The biggest group I was ever part of was maybe three or four girls.  Groups of friends in elementary school formed pretty naturally driven by activities or geography or moms.  But by middle school I had narrowed the field quite a bit.  I think I almost preferred it that way.  I’m a secret introvert and even now if I go to a party where I know I have to make small talk with 30 people, I feel a little ill.  I want to grab one person and hold their face in my hands and discuss their relationship with their mother at length.  I know.  Now you won’t invite me for coffee.  It’s ok. I just generally suck at making ‘light conversation.’

In late high school when we were actual women making friends with other women, I had one ‘best friend’ and we floated between groups of other friends and hung out with a group of boys as a duo. This totally worked for me.  The guys were a blissful counterweight to any drama she and I might attempt to stir up. 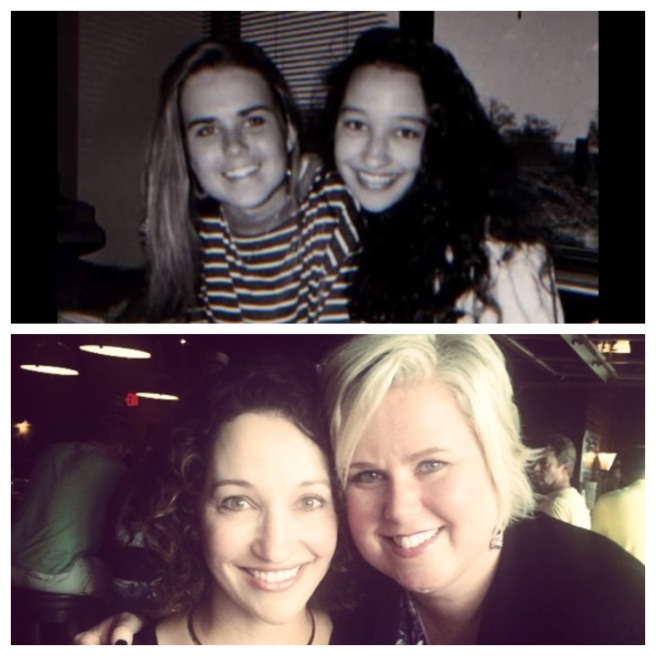 College was similar.  Again, I had lots of women I spent time with but not a sorority atmosphere certainly. I have several friends from those four years-but they aren’t friends with one another.  I found my future maid of honor in college.  We disliked each other a great deal the first few weeks of freshman year.  She found me bold and over confident.  I found her shy and irritatingly not wanting to be the center of attention.  Plus, she wore mysteriously preppy rugby shirts and I was trying out my REI meets goth look with all black clothing, dark red lipstick and hiking boots.

We must have pushed past all that since now she is the executor of my will.  Below you will find a montage of our early relationship and no, no alcohol was involved in striking any of these poses. Sadly, no mood altering chemicals were involved when I chose any of those haircuts either.  I can own it.

Graduate school.  In two years of seeing the same people every.single.freaking. day, I made a few friends.  Three.  And I made one lifelong close friend.  We were like hecklers at a comedy club except we were in Psych classes.  I’m not sure everyone appreciated our bond.  We thought all of the same people were exactly the same kind and same amount of crazy.

Work.  Various settings.  Various people.  Please.  I have yet to find an adult human who relishes attending their own company party let alone hang out with their co-workers every weekend. Worlds colliding.  It rarely works out ideally.

Church.  Surely church is filled with a lot of nice women.  I never did find 6 that all wanted to hang out together though. Never.  Acquaintances yes. Cohesive friend group?  Nope.

Neighborhood.  No.  We live on a street that ranges from newly married to retired couples. There are no block parties.  No progressive dinners.  No pool parties.  Last year we had 0 trick or treaters.  One banner year we had five.  They must have gotten lost. My closest neighborhood friend lives next door and I surely couldn’t have survived the last 18 years without her but we have our differences.  She is 69.

So-over the years when I see on social media photos of 8, 10, 12, 15! women together on trips or dinners or book clubs or scrapbooking weekends or reunions or 5k’s or wine tastings or etc…I always think…really?  How?  How did I never end up having a group of friends?

And then I realized I have one now…my first friend group.  At 44 years old.

I have finally found my sorority.  Accidentally.  It’s my ‘mom friends’.  The extensive group of women who surround me who are raising their children alongside me are my tribe.  Phenomenal, intelligent, strong women.  They know me.  They know each other.  We have a lot in common and the kids bond us together even though some of our kids are different ages and don’t even hang out with one another.  Doesn’t matter anymore.  They are women who work outside the home and women who work inside the home.  They have one child, they have four children.  They are single, married, widowed, divorced.  They are estranged from their parents, have ailing parents, have dead parents, have under involved parents, have over involved parents, all while parenting their own kids.  A few are over the top optimistic and a couple are intensely sarcastic and a couple are so wicked smart and a couple are wild procrastinators. They are volunteers and coaches and organizers and entrepreneurs and piano teachers and writers and religious and not religious and some are great cooks and some are ultra crafty and some exercise and some talk about exercising but never actually do and some are loud and outgoing and some aren’t and I value and cherish them all for their gifts and their challenges and their grit.

These women, they make my life so much better.  My circle of trust.  They make the grind of life tolerable.  They are my go to when I have a question about what the heck is wrong with my kid(s) or to tell when something goes well with my kid(s).  They celebrate my successes and lament with me when it all goes to shit.  Some of them I see in person 3 times a year, others I see weekly.  We go on mom field trips and do important ‘doughnut research.’  It is my first experience of having a large number of women who make me feel “we are in this together”. I have 20+ women who would drop everything and pick up my son if I needed it.  I would do the same for them.  They are my emergency contacts.  I have cried with them in Target.  In Target.  Right there next to the light bulbs and laundry detergent and bananas.  That is friendship.  It is an intricate but strong and supportive web of friendship that holds me together some days during these intense parenting years.

These women…they teach me.  They educate me on camps to look into, where to buy something for less, why a particular teacher is so valuable, what to open my eyes to and when to shut my ears.  NO KID REALLY NEEDS TO BE 6 YEARS AHEAD IN MATH.  They know stuff.  They recommend books and doctors and websites and restaurants.  They gently explain the reality of why I could never actually survive being a hockey mom and how many things are likely going to turn out just fine and probably don’t need my micro-management.  They point me in the right direction when I need to get whipped about something and present convincing arguments for when I really need to calm the hell down.    (It’s almost always the second one)

This photo was taken on my birthday last year.  Not even nearly everybody who is important to me is in the photo (obviously)…and I didn’t even have a chance to talk to everyone this day and hold their face and delve into their inner soul.  But it’s ok.  They know I care what happens to them.  I’ve got their backs.  I’ll catch up with them at school or on the soccer field or in the church parking lot or over lunch or maybe at Target.

We will cry at Target.  Together. Sisterhood. 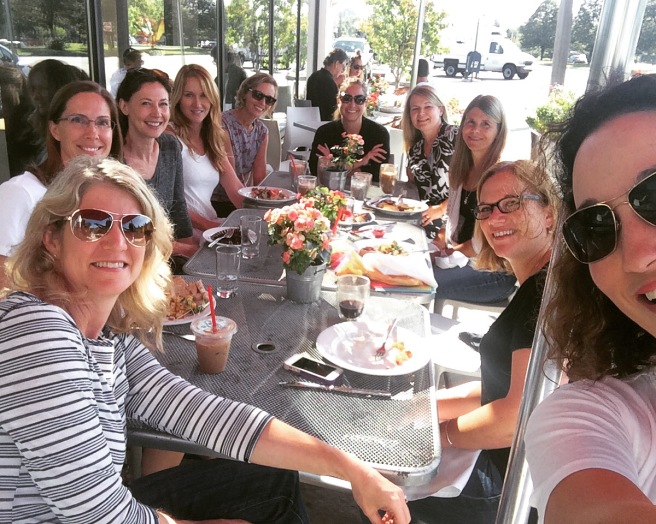