I read that in the Nancy Meyers films (It’s Complicated, Somethings Gotta Give, The Holiday, Father of the Bride, etc.) that she feels that the homes themselves become main characters.  I feel exactly this way about my house.  I know it’s silly because my house is neither grand nor unique nor historic but it is where all the most important plot twists unfolded for me and my main characters.  Let me tell the story of how we bought this house…

One weekend in 1997, my husband and I got into an argument over something really stupid.  I can’t remember what it was about but it’s a very safe bet it was very stupid.   He came into the room holding the newspaper and said, “Let’s go look at this house I found.”  I said, “I don’t even want to live HERE with you right now.”  He said (sigh), “Just get in the car.  Let’s go look.”  I got in the car and crossed my arms.  I was determined to hate everything.  We drove out to the western suburbs and looked at the listing.  4 bedrooms.  Two way wood burning fireplace.  1 acre lot. Above ground pool.  Octagonal library with a ladder.  We loved it. We jumped up and down.  Argument forgotten.   Then we invited all of our parents out to see it and they collectively killed all of our house dreams.

Seriously.  None of them thought it was a good house for us.  There were concerns we couldn’t afford it.  (The bank thought we could and we had confidence in the bank)  There were concerns about the size of the lawn. (We thought mowing sounded fun)  There were concerns about the pool and the miles of redwood decking that surrounded it. (We liked the decking- decking is pretty and pools are super cool when you don’t have one) There were concerns about the cosmetic changes we mentioned we wanted to make. (How much could a few hundred changes possibly cost?)  Oh…and this.  They all seemed to agree that we weren’t “maintenance people”.  What??? We owned a townhouse and we painted rooms and changed the air filter regularly and my husband had changed a microwave fuse himself (while I watched encouragingly).  Sure we took naps EVERY Saturday and Sunday but we could become DIY/handy/maintenance people if we wanted.  They didn’t even know us.

We left there depressed and offended.  So in my infinite 26-year-old wisdom, I thought we should buy it and we get the pool, the library, the land and the satisfaction of sticking it to all of our parents proving them wrong. My husband, who is less prone to revenge purchases than I am, took a different approach. He thought we should look at 3 more houses in the area in the exact same price range to prove to them that this house was a great idea and a great deal and by far the very best of the four.  I was on board.  Now we would have research to back up our spite purchase. They’d be sorry.  But they weren’t.

We bought house #2.  We walked in and I made a beeline to the view out the bay window and couldn’t contain myself.

Then my husband wanted to “talk her down” on the asking price but I dry heaved into the toilet and sobbed and begged him to “PAY HER WHAT SHE WANTS, THAT HOUSE IS OURS I CAN JUST FEEL IT’S THE ONE”.    Much to his dismay, as a sales guy and as a man…we did just that.

So we purchased this house in February of 1998.  It was built in 1988 so it seemed fairly new. It was so large. I remember thinking it was so much space, I would likely lose a future child here and I probably would have to yell loudly just to find my husband in our suburban castle.  The reality now is that I feel like we are all on top of each other 24/7 and we all own way too much crap to fit in this house and I can hear someone clip their fingernails two floors away.  It’s not large or new and the hideous oak vanity in the kid bathroom stuffed with both superhero bath toys and Smashbox eyeshadow palettes is proof of that.

Over the years we have looked at hundreds and hundreds and hundreds of other houses on the market.  Houses with mud rooms.  Houses in cul de sacs. Houses with laundry rooms that you could turn all.the.way.around.360 degrees.   Houses with less square footage and better layouts and more square footage and higher ceilings and windows that open correctly.  Houses with insulation.  Houses that are 2 million dollars out of our price range.  Then I typically find 24-73 flaws in each and every one.  We have always felt that if we moved we would just be trading the devil we know for the devil we don’t since every home has issues. Every single one.

We have had some crazy stuff happen at this address.  We are in the woods and on a tiny lake.  Before we moved here, a movie was filmed on the lake behind our house.  Sometimes when I’m out there freezing to death playing boot hockey, I like to think that Natalie Portman and Matt Dillon both froze their asses off in the same spot.  We had an epic carpenter ant infestation.  (had to replace two large windows) We had a spectacular nest of 13 red squirrels in the rafters of the porch . (Dad and husband + case of beer+ 2 BB guns and all but one was removed.  I shot the last one myself from inside the kitchen. Dropped him like a sharpshooter.)  There was a time that a raccoon was trapped in the garage and had a panic attack which caused him to knock every single thing off of every single shelf.  There was the chipmunk that ran into the basement when the babysitter was here. The rogue moose on the lawn that a neighbor tried to convince me was a deer.  Lady…I know the difference between a MOOSE and a DEER.  The year the beavers built a sizeable lodge and therefore mowed down all the trees on the edge of the yard. The hundreds of dollars and hours we have spent trying to stop the voles from building a subway system under our grass.  The red fox. The red fox that was foaming at the mouth.  The time I caught an opossum on the deck licking the grill tools.  (There was some talk about sanitizing them in boiling water and they ‘would be fine’.  No-they’ll never be fine. I’ll never be fine. Garbage.  Bye tools and disgusting opossum saliva.) The wild turkeys. The coyotes.  My favorite great blue herons stalking the spring frogs.   The theme here seems to be us enjoying nature while keeping nature at bay.

So…it turns out we are not maintenance people.  Our parents knew us.  We hate it.  We like naps better.  But we do the best we can.  We have had some things remodeled.  We have left some things be.  We have made some concessions.  We gutted the kitchen when I was pregnant with baby #2, also the year my dad passed away and I had a 2 year old.  I don’t recommend that.  We spent a bundle on a new roof and flashing because apparently the builders thought rain coming in the house was optional.  We got a new front door.  We have painted and repainted and painted again.

But the best things that have happened here are the human stories.  The stories that have unfurled within these four walls.  The memories made.  The changing cast of characters and all of their small and large experiences.  This house is where we brought home each of our three tiny babies.  This is where the crib was put up and taken down 3 times and in two different rooms.  This is where all three of my children took their very first steps.  This is the house that my dad and brother painted one summer laughing and laughing. This is where part of my dad’s cancerous tumor (he called “the alien”) fell out of his leg.  My grandma sang in Swedish holding my infant daughter in the rocker on this porch.  My mom played badminton on this lawn with her grandchildren. These are sacred places for me now. 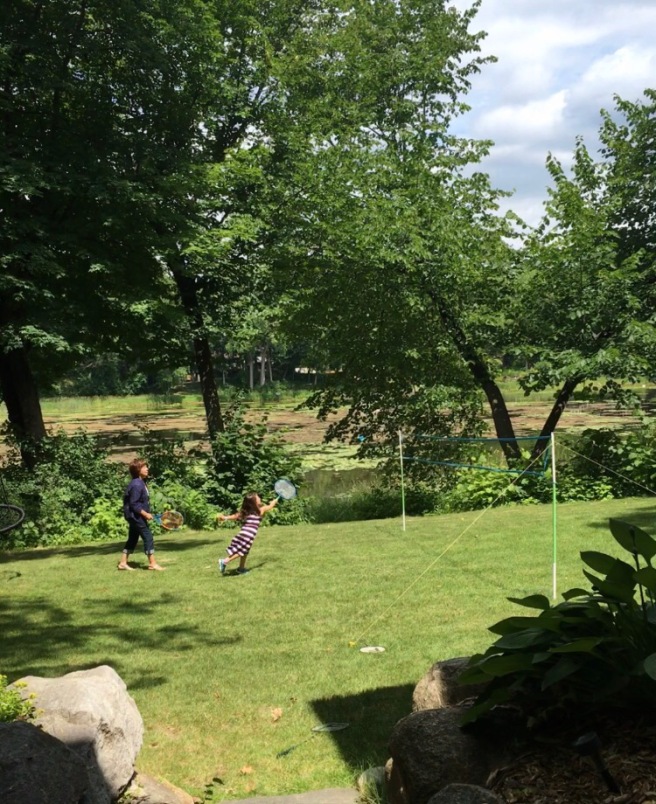 This is where great celebrations and great tragedies and showers and parties and fun holidays and so-so holidays have been shared with friends and family.  Our sweet dog Grover was buried in this yard. He slept in that corner. He curled on that couch.  This is where the average family dinners and the special introductions to future family members has occurred.  This house is where long standing traditions have been kept and new ones have been started.  This is where the kids have played and grown and read and  crafted and slept and had their friends over.  Sleepovers with 1,2,3,4,5,6,7,8,9,10,11 kids happened in this basement.  This is where the family photos were taken.  This is where we baked the cookies and made the popcorn balls and grilled homemade pizza and had game nights and movie nights and bonfire nights and Halloweens and ice skating parties and trampoline games and basketball games and fireworks.

I have now lived here longer than any other place. In February, we paid off this house.  This old house.  We made our final payment exactly 19 years to the day we moved in because I like ceremony.   I have come to realize that it is not common or popular to pay off your house these days.  This is because it is not common nor popular to stay.  Stay.  But we had been working toward this day diligently as we plan to stay right here.  Forever.

I’ve hugged and kissed and held hands and laughed and cried with all of my favorite characters in this house.  And as it grows older and falls apart all around me…it just becomes better. More important. More appreciated.

It’s my favorite place of all time.