I had a boyfriend in college who told me the U2 song “Who’s Gonna Ride Your Wild Horses” reminded him of me.  Nice. I didn’t give it a thought in 1991, despite the fact that he mentioned it.  A LOT.  I liked U2.  Cool.  A song reminds you of me.  Cute.

Cut to two years ago when I was listening to that song.  I listened closely to the lyrics maybe for the very first time over and over again.  UH…the boyfriend of yesteryear was not paying me a compliment.  Apparently, I was “an accident waiting to happen” and “left his heart empty as a vacant lot.”   Also, he seemed to know well in advance that we wouldn’t last. Also, I can literally remember standing in the house he lived in senior year listening to that song and seeing ruby red leaves on the tree outside his 2nd story window.

And that is the power of music.

I grew up in a music rich household and my parents cast a wide net.  When my parents bought their first CD player (which we were not permitted to touch) and purchased their first 10 CD’s they ranged from Johnny Mathis to Willie Nelson.  From Dolly Parton to Pavarotti to Streisand to Whitney Houston.  And because of all the genres, I have grown to love music but I am not a music hipster.  So, don’t ask me for a great playlist because I just like what I like and I’m not a cool music person.  I don’t know up and coming bands and I don’t care that I don’t know.  I worked at a radio station in my 20’s and once when the radio station manager was in my car he assessed my pre-sets and told me Arbitron (the radio listener data collection agency) could only assume I am an elderly man with two teenaged daughters.  Also, not a compliment.

But I really enjoy music.  All kinds. With few exceptions.  I am not a big fan of Christian Radio.  I have a theory Christian music is designed to be “singable” which lends itself to a very specific range and not very inventive arrangements.  It also seems like the lyrics are the same 26 words shuffled around.  I love old hymns and classic arrangements and maybe about 5 modern Christian songs.  All the rest make me want to stab myself in the ear with a pen.  The one they play at Christmas called “Christmas Shoes”.  Help.  They should pass out Lexapro to go with that song.  Also, I’m not into country music.  I like a few songs.  But definitely not all.  Many of them are also fairly easy for an average person to sing. Hmm…maybe that is the problem.

But I like a wide range.  My children have me listening to Juice WRLD.  I think he is quite talented even though he clearly can’t spell.  I have Crosby Stills and Nash on my phone and Stevie Wonder and Pink and LP and The Killers and The Decemberists and Lou Reed and Annie Lennox and and and and Storyhill.  Storyhill is all over my playlist and if they ever made a movie about my life, Storyhill would be the only artist on the soundtrack.

(note: they will NEVER make a movie about my life because nobody wants to see that much laundry and insufferable stretches of me laying on the couch uselessly pondering other choices I could have made in my life)

Storyhill could be what some consider a ‘college band’.  But to me they are so much more.  (insert heart emoji’s here)  I first learned of the existence of Storyhill back when they were called Chris and Johnny.  1989-Freshman year of college Johnny lived in the room next to my boyfriend and often would be singing and playing the guitar into the wee hours of the morning in that 10′ by 10′ hovel.  (apologies to my mother who now knows I was in the boyfriend’s room in the wee hours)   I could not handle the incessant music.  1am.  2am.  3am.  That damn guitar.  The boyfriend said, “You need to meet him.  He’s so cool.  You’d really like him.  I mean all the girls like him.”  But I resolved not to like him because the guy was relentless with that freaking guitar and because I do not appreciate any types of singing at 3 am.

But then I did meet Johnny.  And damn-he was so nice.  And talented.  And yet seemingly unaware of quiet hours.

Sophomore year.  I finally rid myself of the late night concerts or so I thought.  But then Chris of Chris and Johnny arrived on the scene and some of their best friends lived in the room next door to mine.  So not only could I not escape solo impromptu concerts, now there were two of them.  Turns out…both nice.  Both good guys.  Both so talented. Both night owls.

Junior year.  By junior year I just gave in.  (they did not live anywhere near me that year) Now I went to see them play on campus regularly at normally scheduled times.  They sang songs about Montana and water and growing up and they made me feel young and free.  Their music made me think about all the different possibilities ahead.

Senior year.  Midway through senior year I met my future husband and it turns out HE loved their music.  If I was a fan, he was a superfan.  Eventually we owned all their music.  We have cassettes, cd’s, mp3 files, itunes files, the like. In the 90’s, a boom box was dragged up to the BWCA to play their songs at max volume in the serenity of the woods.

We went to many of their concerts over the years.  Small venues, larger venues. Bandshells and coffee houses.  In town.  Out of town.  They were on Prairie Home Companion.  They were on Minnesota Original on PBS.  Their venues were packed.  I felt slightly resentful toward these new groupies…did they even know them?  I felt like one of the original fans.

So Storyhill grew up and so did I.  I got married. They got married.  Everybody had children.  And it was then I started to consider what kind of lives they must lead.  Late nights.  Odd hours. On the road.  Tours.  Creating art.  Practicing art.  Selling art.  I always appreciate stories they tell at concerts because it sounds like (just as life has been for everyone) it has not all been unicorns and roses.  They lived apart for a while.  They had a reunion.  They did solo projects.  Then they made more music together.  They have likely spent more hours together than most spouses could fathom.  And I cannot begin to imagine the sacrifices they and their families have made for their art.  So this is my love letter to Storyhill and to all artists who have taken a challenging path and in turn been with the rest of us every step of the way during ours.

Now it has been 30 years of their music.  Do you know how a song can transcend space and time and place you in a singular moment?  Like when I hear Joe Walsh’s ‘Life’s Been Good’ I’m in elementary school.  I’m in the backseat of our two tone brown Oldsmobile Cutlas Ciera.  We are downtown Minneapolis waiting curbside for my dad to walk out from work at the courthouse.  Sun is beating into the windows and the metal trim in the backseat is hot to the touch.  But with Storyhill, it’s different.  I’m all the ages.  It’s every year since I was 17 years old.  They’ve been with me for 30 years.  I’m the college girl who broke someone’s heart (Looking for Someone)  I’m the young bride. ( If I Could)  I’m on a road trip without a care in the world. (I-90) I’m 31 and broken when my dad passes away (Old Sea Captain).  I’m sending my husband to the BWCA while I’m home with 3 kids under 8 years old. (Steady On) I’m singing my 3rd part harmony while cleaning the kitchen (every song they ever wrote and I’m AMAZING) I’m 40, 44, 48.  There is no song of theirs I can turn to that does not bring me to many ages, places, memories, versions of me.

I cannot wait until Storyhill turns 50.  They keep getting better and better.  And if they are phenoms as soloists, they are spectacular as a duo.   Buy a song. Buy an album. It’s less than a large caramel machiatto and lasts forever.  Better yet go see them live.  I cannot help but feel that I am bearing witness to something rare, special.  I’m hearing evidence of two people who are so clearly doing what they are meant to do.  More music, more art, more wonder to usher in the next chapter of my story… 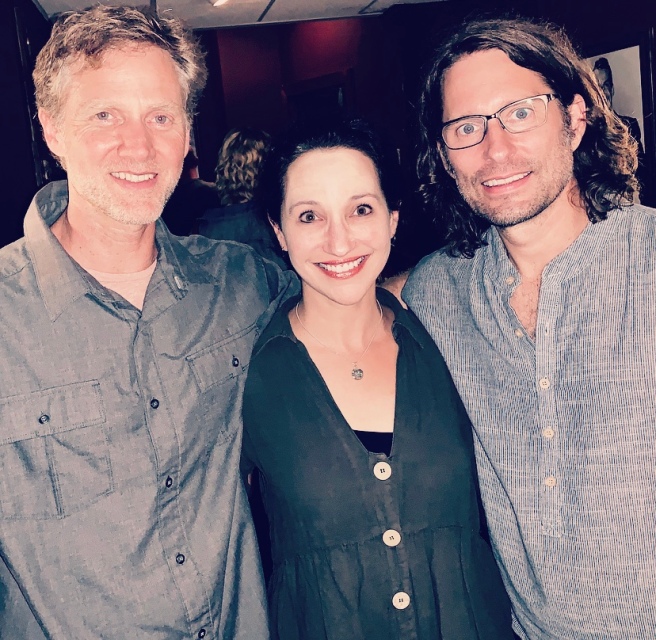 Tell me.  Who is on your soundtrack of your life?