The Annual Scouts Pinewood Derby is this Saturday. I loathe the derby. LOATHE. You heard me.

My oldest son, (11), will race his car with all of the other cars in his age category.

And if I were a betting woman, which I’m not, I would bet it all against him. He will lose. Big. He won’t come in 2nd place or 3rd place or 4th place or 10th unless he gets really lucky and Influenza A takes several of his peers out of the race. And this is why. See photo below. This kid is absolutely screwed because… 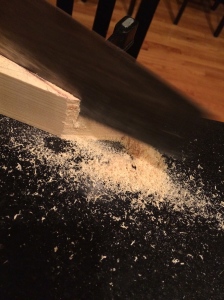 We make him make his own car.

I know. Horror. Five years ago when he started in Scouts, I was under the impression that this was a fun kid driven (unintended pun) event. A kid event that was a mere part of a larger organization designed for kids. Wrong. Wrong. Wrong.

The first year I didn’t know exactly what we were supposed to do with regards to car assembly and my husband appeared to know exactly as much as I did. We winged it. My husband asked my son what he wanted.  He then cut the car on the line my (then 7 year old) had drawn with a sharpie. He used a handsaw with my son’s tiny hand enclosed in his. Also…they duct taped a metal lighter to it for weight. As you can see he used markers and a jaunty foam sticker on the side that said, “Go Team.”  This is not traditional. He called it “The Hammer” which after the race became quite ironic. 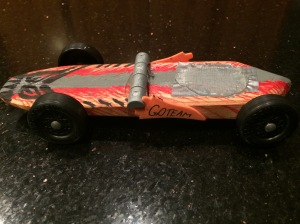 The second year I saw parents carrying in cars in acrylic cases. It’s the kind of case I would purchase if I won an Olympic Medal or a Golden Globe and wanted to display it on the mantle. My son carried his car in his coat pocket. I started to wake up this year. I noticed some things.  People were intense about this race.  People were discussing the importance of graphite on the wheels.  This was also the year that the winner of one den was announced and joy ensued only to have the ‘win’ retracted after his car apparently did not fit into the “parameters” set forth in the master rule book.  That friend (age 8) quit scouts that year.

The third year I thought my son might want to put a little bit more work into it since he was a bit older. I asked around to find out where to find materials other than our household craft bin. Someone told me I absolutely NEEDED to drive to “Hub Hobby” in Richfield because they have everything and the people who work there will know exactly what I need/want. Someone else told me I could Google tips on fastest designs and watch YouTube videos tutorials on how to build a “winning” design. People from all over the country have made these tutorials.  I watched one. The person in the video I randomly selected was about 40 and clearly needed a social outlet…and a shower. He really needed a shower.  Someone else told me that if by any chance we had (bought) a particular saw …my son’s car would have a clean and precise cut.

You have GOT to be kidding me. No. Nope. No.  I’m not having a derby car in this house worth $324. So we pressed on. A neighbor loaned us a saw that had a cord. A real saw with a cord. It really did not seem to help much.  My son banged the wheels on with a rubber mallet. There may have been a slight alignment issue that year. 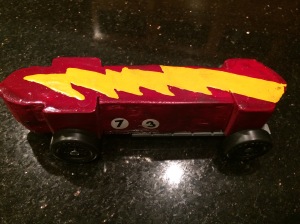 Last year he made the car above and requested spray paint (serious upgrade). I bought the paint at Michael’s.  He sprayed it.  That crap is toxic.  He named the car “Striker”. It has an insanely phallic shape, which I am going to continue to ignore. He calls it “aerodynamic”. That is not the word that I think of when I see it. He thinks he came in 4th place last year. It is darling that he remembers it that way. He did come in 4th out of 8 in the second heat but never advanced to the big race. This year though he noticed something…something that we had never spoken out loud. As we left he said, “Mom, a lot of those cars were just made by the dads.”

Yes. Yes they were.

Let me be clear, I think it’s great if boys are sitting down with an adult and learning how to use a jigsaw, a power sander, glossy paint techniques, being innovative, doing some quality woodworking, creating something side by side, working on the art of collaboration. Making a memory. Kudos. Many boys do this to make their derby car. Many do it this way and that is wonderful.

If there is a father/grandfather/mother/aunt/relative of a scout who drank 4 Scotch and Soda’s before they built the Pinewood Derby car of THEIR dreams at 11:00pm (while junior is sleeping) with $7800 worth of power tools and they are racing it against boys who made their own and they have the audacity to pump their fist in the air at a win that THEY clinched against a 9 year old…I have a BIG problem with that person. And that person will be there on Saturday.  Many manifestations of that person will be there winning for their kid.  They need help.

So if you see me Saturday at the derby…no need to bring this up…because I’m really just there to root for my son. And I’m going to cheer him on all the way to 132nd place.  And to the derby competitors in the 35 years old and up category-I guess I have to thank them for teaching my kid a valuable life lesson…

Work hard. Do your best.  But sometimes…the race is rigged.

2 thoughts on “Call your bookie: Surefire bets on the Pinewood Derby”