I went on a trip. (see blog post #5)   Update: The children are alive. I am alive. My husband is alive. A few things got broken while I was gone but none of them were bones.

If I had to sum up my experience with one word it would be…Amazeballs.  That is not a Sanskrit word but we say amazeballs in our house often and it conveys the mood I’m after.

I meditated. I did yoga. As in, I took 11 yoga classes in 7 days. I ate delicious, healthy meals, that were delivered to me while I stared at the ocean. I got massages. I actually got a “I am a skeptical person but I’ll just push past it because this is a new-age type massage and oh sure I’ll just hang onto these crystals while you clang a gong in my ear massage”.  (highly recommend it)    I had acupuncture. I did Zumba. (this was more difficult for me than the crystals or the needles in my head. I have 0 dance ability when I have to follow someone else at a rapid pace)  I spent A LOT of time on this platform. 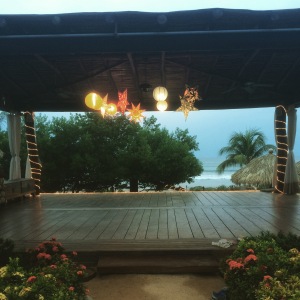 I attended a full moon ceremony.

I attended a cacao ceremony.

I found a live sand dollar. 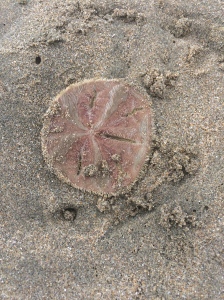 I had a chance to enjoy and appreciate some people who I already know. We had some good laughs.  I rode a horse on the beach at sunset.  I watched a horse ahead of me (carrying my friend) collapse onto the sand, crumpling from exhaustion at the end of a long day and I nearly peed in my pants laughing.  (The horse and the friend are both fine)

One day, my eyes were closed (while I was still awake) for six hours.   And apparently, I become a much calmer person when I do this.

I drank Mescal out of this and then I took the cup. Don’t tell. 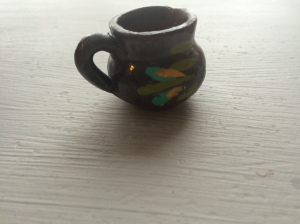 I danced. Wildly. If a video surfaces of this, I am denying everything.

I saw baby turtles hatch and walk into the ocean. 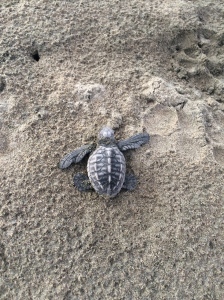 I cried. I laughed. I wrote. I read part of a book. I didn’t miss reliable wifi. I didn’t miss text messages. I stopped importing emails. I loved leaving everything in my open air hut with no lock.  I relaxed into rotating my same 5 items of clothing.  (Turns out I didn’t even need my fleece socks that I brought in 88 degree weather) Everything fell away and the things that don’t matter really didn’t matter. I missed my people at home but nothing else.

I let my guard down. This was tougher than the Zumba.

I was thinking about what it is about travel that is so appealing. It is more than the sun, the lull of the ocean, the escape of daily responsibilities, the novelty of a foreign place.  Okay, the scenery was pretty incredible.

But I think even more than that, it’s the perspective gained.  It is being able to take 5 minutes to resolve something that you have been trying to resolve in your head/heart for weeks at home.  Or to decide you are done with it altogether.  It is doing one thing at a time.  It is the indulgent 30 minutes spent on thinking about a dream, a plan, a possibility, a change you want to make.  It is the simple pleasure of having a conversation in its entirety.  It is the decadent hour spent on nothing but being.

I have been thinking about how once you are a ‘certain age’, you are surrounded by people and reminders of things you no longer do. I hear things along this vein daily.  Things that people used to do that they can’t do any longer.  The losses.  They used to ski but now their knees are bad.  They used to drive but now their night vision is poor.  They used to go out and hear new bands play but now they don’t.  Used to. Used to.  Then there are the losses of things that never happened. Things that they wanted to do but they can’t. Or think they can’t.  They wanted to go to Venice but now they won’t make it.  They wanted to live in a rural area but are stuck in a big city.  They dreamt of being a painter/doctor/singer but never thought they were good enough.  Maybe logistics or family or money or health or circumstances  or previous choices are standing in their way.  Maybe we all stand in our own way sometimes.

But for a week I was encouraged to do everything.  I can’t tell you how restful it is to be given a blanket permission slip to do everything or nothing with equal value placed on both.  Restful.  I was exposed to things I had never tried and surprised myself with this: 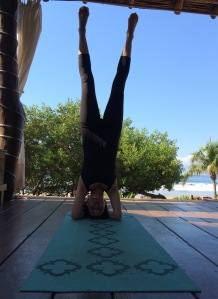 Yeah.  That’s me.  I had no idea I could stand on my head.  I’ve never done it before and when the instructor asked if anyone wanted help trying it…the elderly woman behind me said, “Go on. Just try. You should.”  And it worked.

So that is what I am going to try desperately to hang onto at home…Life isn’t full of things I used to be able to do.

The world is abundant with experiences I haven’t even yet entertained.